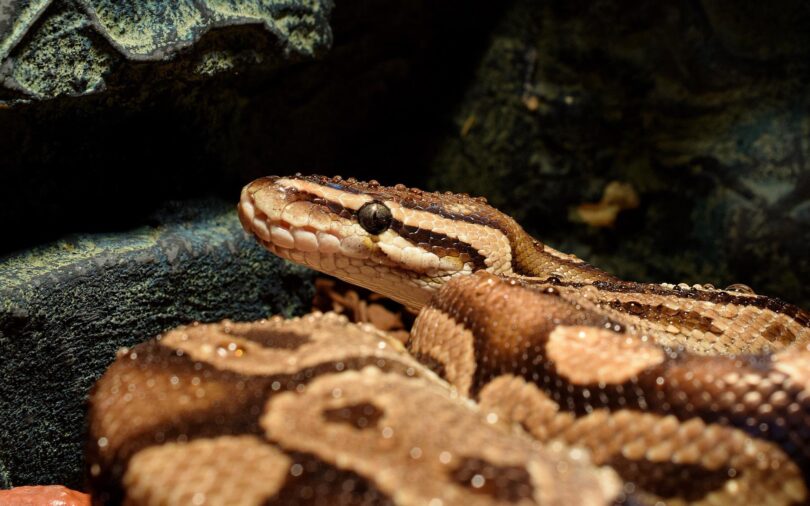 In this article, we have covered the breeding process, including

There’s no doubt that a ball python makes a great pet, but you may get even more satisfaction out of breeding your snake and selling its offspring.
Seeing your pets producing healthy young is a great experience, not only awe-inspiring, but educational to adults and children alike. Another benefit of breeding is that, when you sell your snakes, you can make yourself a little bitof pocket money.

Before embarking on a breeding program, make sure that you have homes to which the snakes can go. As much as you might love your python(s), everyone has a limit to how many of the slithering creatures they want in their home. Sure, one or two is manageable, but a half dozen might be a bit much. Also remember that although reptilian pets are growing in popularity, they are still quite a niche market, and it might mean hanging on to the hatchlings for a while unless you have already lined up homes for them.

Preparing Yourself For Frustration

To put it nicely, ball pythons are not rabbits. The snake females are extremely particular about their partners and the males aren’t very aggressive in the matter, probably since the females could have them for lunch if they wanted.
It can also be attributed to the fact that the very laid-back nature of the ball python (which makes it such a safe pet to own) means that quite often the male would rather just lay in the warmth than get up to any hanky panky.
More seriously, there is also quite a high mortality rate among hatchlings.
You should keep this in mind if you are soft-hearted or if you are involving children in the process. You will need to understand and explain to others that it’s possible the babies will not make it.

Identifying Ovulation And The Process Leading Up To It

Identifying when female ball pythons are ready to make can be tricky. The snakes originate from the equatorial regions where temperatures are fairly consistent, so it seems as though air pressure might be the trigger for the breeding process to start. Pressures typically being to drop in the fall, October or November, in the northern hemisphere.
A good sign that the females are getting ready to breed is that they start to eat greater quantities of food. They become extremely animated when food is around, and pet owners need to take a little more care when opening their tanks.
It is best to wait until a female is one and a half kilograms or a little over three pounds before breeding. They can breed smaller than this, but when successful, pregnancy and birth take a lot out of the snake female, and a lot of weight is lost. If the reptile doesn’t have enough body weight to cope with this, then there is a risk that the animal could be lost.

Early in the new year (in the northern hemisphere), is the time to look to pair the snakes ready for breeding. It is important to check that the female is ovulating, or the (often) reluctant males will waste their time. Ultrasound can be used, or visual clues can be employed.
A female snake that is nearing ovulation will tend to want to head for the coolest end of the tank, and will “bowl wrap,” which is the process of wrapping their bodies around their water bowls, probably for the coolness and pressure.
They will become brighter in color, glowing in fact, and will show little interest in their food. Finally, when palpitating them, it should be possible to feel follicles, about the size of marbles, under the skin. These follicles are the unfertilized eggs. They will get bigger the closer the snake female gets to ovulation.
The snake female needs to be checked regularly, because ovulation occurs only for about twenty-four hours. Signs are clear, with the female developing a hard midsection and the tail scrunching up.

You will actually want to begin pairing your male and female before ovulation so that they can get used to one another. The best bet is to introduce them in the fall and allow them to mate once a month, every month leading up to the female’s ovulation.
At the point that the female appears to be ovulating, introduce the male once again. It is best to do this at night, since the snakes are more active at this time.
It is at this point that the male’s spurs come into play, gripping and stimulating the female. Look for a lock, when the two animals join together, wrapping themselves around each other. Mating is not a quick job, so this may not happen immediately. Give it three days before declaring the event a romantic failure. Also, when mating occurs, it usually takes several hours, even as long as a day.
When it is over, take the male away for some food and relaxation.
And that is that, at least as far as the male is concerned, and he can go back to a life of lying serenely in the heat of his tank, job done for another year. For the female, though, there remains a lot to do. It will be about fifty days before she lays her eggs, and she will undergo a skin shed in this time. A clue that she is successfully pregnant, or “gravid,” will be seeing her lying at the warm end of her tank, seeking out heat and humidity.

Prior to your python producing, an egg box should be placed in the tank. This needs to be a good-sized container with any handles removed, so the snake doesn’t get stuck in it. In the wild, the snake would find somewhere warm, dark, and damp, so these are the conditions you need to replicate. For a python, something like a child’s toy crate is the ideal size. It should be filled with peat or compost, and some vermiculite from the pet store or garden center (which will be cheaper!).

There will be lots of clues that she is ready to lay. Firstly, she will change her body shape, becoming triangular. In the day or so before laying she will be restless (wouldn’t you, if you were full of large eggs?) and will frequently lie twisted. This is normal, and helps to get the eggs aligned for delivery.
When her tail appears in the centre of her coil, she is probably about to lay. A female ball python typically lays a clutch of six to eight eggs, sometimes as many as ten. She will coil around them once laying is complete, and if any have been laid unfertilized, she will roll them away from the group.
However, it is worth checking these, because she doesn’t always get it right.
Checking is done by turning down the lights and shining a light on the egg. A series of red veins will be visible if the egg is fertilized. Put it back among the group if this is the case.
You will want to be careful when getting near the female and her eggs at this time, as she will be protective of them and can get pretty nasty.

Your friendly python might not be too keen on having her eggs removed, even for their own good. She could hiss and strike to protect them, so movement from your side has to be quick, keeping stress for the snake to a minimum. Carefully, grasp her behind the neck and at the base of the tail, uncoil her, remove the eggs, and then place in her a warm bath.
This will help her forget the eggs, as their smell will be removed. She will get back to feeding—which is important because a lot of weight will have been lost—more quickly that way. While she is bathing, clean out the tank, replacing the substrate. This too will take away the smell of the eggs and get her feeding more quickly.
Your snake may still go back to the egg box to be with her eggs. If she has laid in the box with the eggs for a few days, then check that she hasn’t buried the eggs (they need some air) and that the mixture hasn’t dried out. Also, when moving the eggs, make sure that they are laid in the same position in the box, as they do not like to be rotated. Sometimes, they will be laid as a clump. That is fine, they will separate of their own accord when the time is right. It is also a good idea to place pegs or straws around the eggs to stop them from rolling, because if they do, the yolk and embryo may separate, killing the unborn python.

The eggs—which are not, by the way, completely smooth like birds’ eggs, more like white potatoes—will take about 50-60 days to incubate, usually around 55. After that, with a little luck and lot of care regarding temperature, darkness, and moisture, you should find a lot of little wrigglers have been born.
In terms of eating, the new babies will have a similar diet to their parents, just smaller versions. Baby mice are a common option.