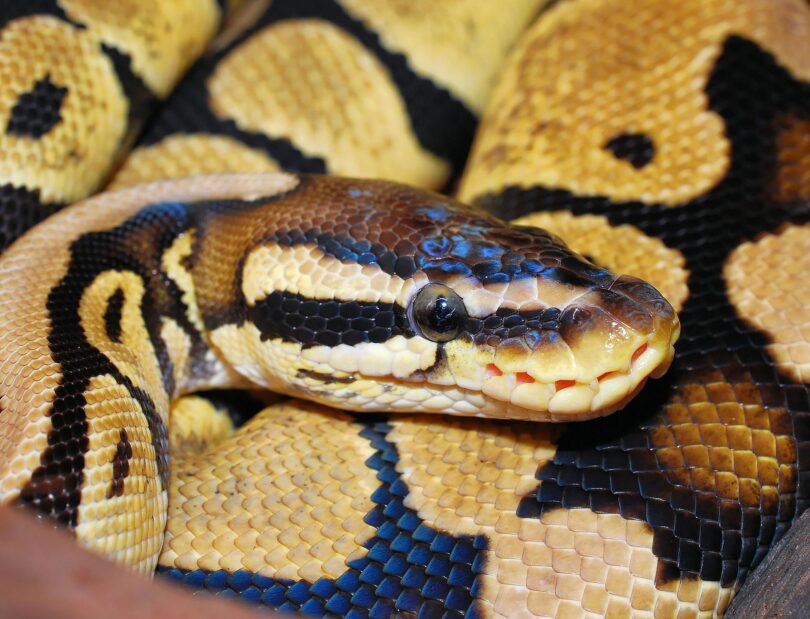 If you are planning on getting a reptilian pet, you’re going to want the best, right? Ball pythons are the blue bloods of the reptile world. Indeed, they are
otherwise known as royal pythons. So in this Article we will :

The species comes from sub Saharan Africa. Usually, it can be found in countries such as Guinea, Sierra Leone, Liberia, and Ghana, as well as the Ivory Coast. It is not venomous, but rather captures it prey and prepares them for dinner by constriction—that is, it crushes them to death with is powerful, muscled body. Along with other pythons, therefore, the ball python is a constrictor.

How The Ball Python Got Its Name ?

You may be curious about how the ball python got its name, especially since we mentioned earlier that it is also known as the royal python.
The scientific name for the ball/royal python is python regius, which is where the term royal python comes from. Scientists called this particular python python regius because many statues and paintings of Cleopatra depict this species being worn around the royal’s wrists. There are also numerous stories of African rulers wearing live royal pythons as jewelry.
So, why are these snakes more commonly known as ball pythons? Well, the common name comes from one the snake’s (often considered endearing by owners) habits. When frightened, nervous, or even just sleeping, the python
tends to curl itself into a ball. Basically, “ball python” is a more descriptive name in regard to the snake’s behavior.

The ball python’s build is stocky and it has a relatively small head in comparison to its body. The snake is usually dark brown or black on top, with a pattern that looks like blotches. The scales become light brown or golden as they blend with the underside of the snake, which is typically white or cream, with randomly dispersed black markings.
However, with the growing market for pet ball pythons, many people have used selective breeding to create a number of different varieties, also called morphs, that have significantly different coloring or patterns. The basic description given above simply describes the most common appearance. The next paragraph will give a run down of a number of varieties. As you will see, there are a range of colorings and markings you can select, if you are willing to pay the price.

Knowing whether you have a male of female isn’t really all that important unless you plan to breed your snake. But who knows? If little Hannibal turns out to be a female snake, she might not like being called by a decidedly male name.
Determining the sex of a ball python can be a bit tricky, but here are a few tips: Firstly, the male of the species tends to be a little smaller than his female counterpart. The largest females grow to about six feet in length, while males typically grow to no more than four feet in length. Although this might seem pretty long, it is not overly impressive for a python, which is good news, since it means that it won’t feel up to tackling a human even if it is extremely hungry. This is actually extremely unlikely in any case; in fact, a dog is more likely to inflict harm than the gentle ball python, but we’ll discuss that more later.
Another difference between the male and female are the anal spurs. These are hook-like protuberances toward the tail of the snake. They are, in fact, what is left over from a time when the animal had legs. This time was many, many years ago—millions, in fact—but pythons have still been legless for a far shorter time than most other snakes.
When looking for the anal spurs, be cautious. Right next to them are the anal vents, which, as the name implies, vent the contents of the anus from time to time. You most likely will not have any problems, as snakes poop infrequently, somewhere in the neighborhood of once a week and once a month. Just be aware.
The anal spurs of a male snake are larger and more pointed than those of a female. This is because they play an important part in breeding, but that will be covered in more detail later.
As you may have noticed, the ways to determine your snake’s sex are relative comparisons, and as such, may not be very helpful, so if you really need to know (because you plan to breed the python, for example), then it is best to get an expert to carry out a definitive check. This involves looking inside the snake and examining its reproductive organs. Your snake may not particularly enjoy the procedure, but it is the best way to ensure that you know whether your snake is a Phillip or a Phyllis.

There are many varieties of ball python. Some estimates suggest that there could be over a thousand different ones. In this chapter, we will look at some of the options, both common and rare. We will cover the physical features of each variety, as well as point out any distinctive pros or cons.
Although you would be hard-pressed to find someone familiar with ball pythons who doesn’t have a favorite type, they are all wonderful options and have their own merits. To avoid showing any bias, they are presented in alphabetical order:

Albino Ball Python – As the name suggests, this is a pale snake, typically bright white with yellow markings, although it can be completely yellow. It tends to have pink or red eyes. As with all albino animals, the albino ball python can be prone to illnesses and skin problems, but it is a stunningly beautiful variety, not to mention extremely popular.
Axanthic Ball Python – Like an albino ball python, an axanthic lacks melanin. However, it lacks only red, yellow, or both, resulting in a stunning silver grey and black snake. In case you choose this variety specifically for its coloring, it is important to note that some axanthics’ coloring will shift as they get older, becoming browner.
Blue-Eyed Leucistic Ball Python – This is a very rare snake indeed (although not as rare as the related black-eyed leucistic ball python), and as such will set you back a hefty amount, depending on how “pure” you want your snake’s features to be. The “pure” blue-eyed leucistic ball python is a beautiful snake of complete white color with startling blue eyes. Depending
on the genes the snake is bred from, it may end up with slightly different coloring or a few markings. This snake may also be referred to as a “BlueEyed Lucy.”
Bumblebee Ball Python – The bumblebee ball python is the result of a “designer mutation,” meaning that it does not exist in the wild. Although there are several different varieties of bumblebee ball python, they all are
characterized by yellow and black markings.

Candino Ball Python – The candino is similar in appearance to the albino, with stunning gold and white markings, but it is genetically different. While albino ball pythons are made with all albino genes, candino ball pythons are made with other genes in addition to albino.
Champagne Ball Python – The champagne ball python is a tan and/or orange snake with irregular stripes and circles along its spine. It also has an all-white belly, which makes it decidedly different from many of the other varieties listed. If you are particularly interested in this kind of ball python, it would be worth taking a look at the pumpkin champagne, a champagne ball python with vivid orange and purple coloring.
Cinnamon Ball Python – This brown and cinnamon-colored snake is hardy
and inexpensive, making it a great starter snake for someone as of yet unfamiliar with caring for ball pythons.
Coral Glow Ball Python – Coral glow ball pythons are remarkably colored, with purple bodies, orange markings, and often, black speckles. However, if you plan to breed your snake, you must be aware that many coral glows have been found to produce only male offspring.
Fire Ball Python – Compared to normal ball pythons, the fire ball python is much lighter in color, a brighter pale yellow than brown. When two fire ball pythons are bred, they produce what is basically the Holy Grail of ball
pythons: the black-eyed leucistic, a white snake with black eyes and red pupils.
Ghost Ball Python – A ghost ball python is created using a recessive mutation that reduces black pigmentation, which gives this snake a hazy, almost spectral, coloring. Hence, its designation as the ghost ball python.
GHI Ball Python – Expect to pay a hefty sum for this new kid on the block. A recent discovery genetically, breeders are only just scratching the surface of the different colorings and markings that can be achieved with this snake.
The GHI is black and golden brown, with a particularly silky look. This snake has reptile enthusiasts going nuts, which is why some people say GHI stands for “Gotta Have It.”
Ivory Ball Python – A beautiful white or yellowish white snake, the ivory ball python is produced by breeding together two yellow belly ball pythons,
discussed later. They have the same distinctive coloring as the blue-eyed (or black-eyed) leucistic, but with “normal” eyes. They are not as rare, and therefore, not as expensive.

Lesser Ball Python – Don’t let its name fool you! There’s nothing inferior about the lesser ball python. This is another great starter snake, pale to midbrown and gold, with impressive markings. It is also relatively inexpensive.
Mojave Ball Python – Another good-looking snake, the Mojave is brown with striking yellow markings and a contrasting white belly. This is an excellent starter animal, available at a reasonable price.
Mystic Ball Python – The mystic ball python is similar in appearance to the Mojave, but with darker coloring. It is a popular snake for breeding, and when mated to the correct partner, can produce a mystic potion ball python, a snake with stunning purple, gray, and pink markings.
Pastel Ball Python – This is an extremely popular variety with much more
yellow coloring than others. They are beautiful and useful for breeding, as their genes enhance yellow pigmentation in offspring.
Phantom Ball Python – The phantom ball python is a lovely black and brown snake with gold markings. It is mainly prized, however, for breeding purposes. Phantoms can be used to produce Blue-Eyed Lucys and purple passion ball pythons, distinctive purple snakes.
Piebald Ball Python – The piebald ball python is a remarkable looking snake with areas of pure white. These areas can be few and little more than splotches or many and wide bands. The rest of the snake varies in coloring and pattern. It is highly desirable because of its unique appearance, so expect a hefty price tag if you choose to purchase a piebald.
Pinstripe Ball Python – This is a lovely caramel brown snake with stripes along its spine. It is a relatively inexpensive choice, so it makes a good starter snake.
Spider Ball Python – The spider ball python is brown and black with a speckled white belly. Its name comes from the spider-like pattern on its back.
Because of this unique pattern, it is used in many breeding projects, but it is quite inexpensive, so it would make a great choice for a beginner who still wants something unique.
Spotnose Ball Python – This snake has a rather cutely spotted nose, to which it owes its name. It also has a faded pattern on its head and an area several shades lighter than the rest of it along its spine.
Super Blast Ball Python – Also known as a killer blast ball python, the super blast is a bright yellow snake with hazy black markings and a lavender head.
Yellow Belly Ball Python –The yellow belly is a pretty snake that is most notable for having, as the name states, a yellow belly.