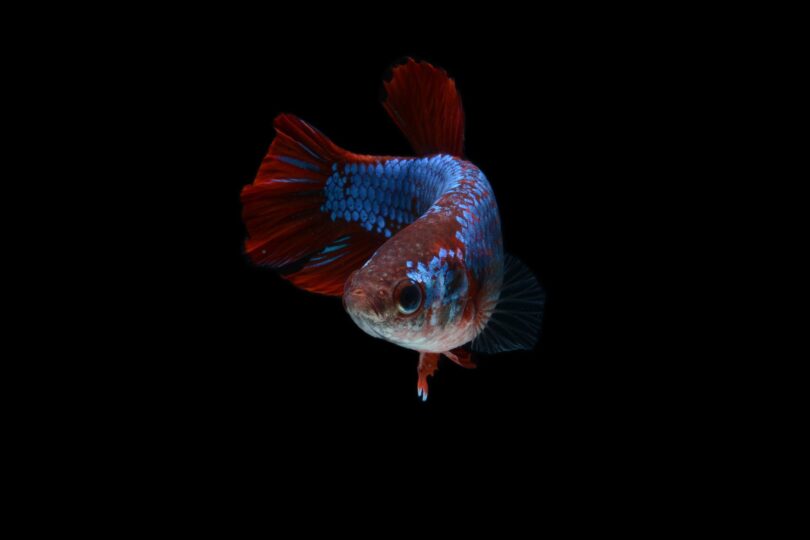 Due to breeding, betta fish have developed a wide variety of different fins, colors, and patterns. There is so much variety in shape, size, and color that it can all be quite overwhelming, even for the experts. I break it all down below to make it as simple as possible.
Tails:
There is great variety in the fins and tails of bettas nowadays. They can be long and flowing, fan-like, spiky looking, and even short and sturdy. Below is a list of the main tail and fin types of bettas.
Combtail
The comb-tail got its name due the comb like appearance of the caudal fin.
The tail fin on a comb-tail has a fanlike shape with rays that extend beyond the fin webbing. This gives the fish a spiky and spectacular look, especially while flaring. Because of the fins large size compared to the rest of the body, the tail can have a droop to it.
Crowntail
This tail has a very similar look to that of a comb-tail only that it features less webbing and more of the extended rays. The tail has a very spiky appearance, and it is a tail type that is very easy to recognize.
Delta/Super Delta
A betta with a delta tail starts narrow at the body and then widens, giving it a triangular shape. The name originates from the Greek alphabet. Delta signifies the letter D which is drawn or written as a triangle, hence the name delta.
The difference between a regular delta and a super delta is simply the extension of the tail spread. A super delta tail gets close to a 180 degree spread. A full 180 degree spread would be considered a half-moon tail, which is listed further down below.
Double Tail

This one is very straightforward… a double tail simply signifies a double caudal fin.
Half Moon
A half moon tail is very similar to a super delta tail only that it reaches a full 180 degree spread. Bettas featuring a half moon are shaped… like a half moon, or capital D. This shape is highly sought after as it looks spectacular in a tank. It is important to note, however, that fins this large are very unnatural.
Half moon Betta are poor swimmers and carrying all that fin can get them into trouble that can lead to tail damage.
Round/Fan Tail
A round tail is also very straightforward… This simply means the caudal fin is round in shape. It is sometimes referred to as the fan-tail, as it resembles a fan.
Spade Tail
The spade tail is very similar to the round tail. The main difference is that rather than the tip of the tail being round it ends at a point. The tail resembles the shape of a spade in a card deck.
Plakat
This is a short tailed betta fish. It is named plakat as it resembles closely to wild bettas. These are stronger swimmers as they have natural, smaller fins.
Rosetail
Rose-tail bettas have a similar look to half moon bettas. They both have caudal fins of 180 degrees or more, just that rose-tails feature more branching. It is said that this effect looks similar to that of ruffled rose petals, hence the name… rose-tail.
Veil Tail
This is the most common tail available in most stores. A veil tail betta has a long flowing tail similar to a… well… veil. The fins of a veil tail betta are usually long and hang.
Colors
The colors of a betta have greatly evolved past the dull colors they originally sported in Southeast Asia. Normally a darker greenish or grayish color to assist hiding in still, murky waters has now become an array of different vibrant pigments. Betta fish colors today are not as simple as yellows or blues. Read on below to learn more about some common colors of this exotic fish.
Black
Black is a very unique color in betta. There are 3 types of black, all with different levels of pigmentation. The black colors are melano, black lace, and metallic black. Melano black is the darkest of the bunch. It is a very sought after color as Melano females are infertile, this makes it a rare specimen.
Black lace and metallic black bettas can also feature a deep black color but nothing like the melano. These species are more readily available as they can be bred more easily.
Albino
Albino bettas have no pigmentation and so are solid white. Just as most albino animals, this betta will have pink or red eyes. Unfortunately, these fish usually suffer from very poor eyesight and can go blind quickly. They are very rare.
It is also possible to have a completely white betta fish that are not albinos.
We can differentiate the two colors by looking at their eyes. White bettas will have black eyes.
Blues & Greens
Bettas can be many different shades of blue. From a bright “Royal Blue” to a “Steel Blue”, so many blues have been developed. Even the very difficult color to determine, Turquoise is available. This is a mixture of blue and green that feels as though it can change color depending on the light.
Green by itself is difficult to find in bettas but possible. Dark green is one of the more sought after colors, as it is one that is typically rare.

Orange
Orange bettas are typically on either the extreme bright side of the spectrum, or on the paler end. It is common for them to have brighter spots of orange on both the body and fins.
Purple
This is a truly spectacular color in the world of bettas. It is hard to find a completely purple betta, as they commonly have some blue or copper touches to them.
Red
Red is a common color seen in bettas. Although it is very common, it is still a color and stands out in a tank.

Patterns on Betta
It is also very common to distinguish bettas by the patterns on their body.
These patterns are named after how many colors are on a bettas body, how they are patterned, and where they are from. As you may have noticed by now, there are endless possibilities when it comes to finding a unique betta.
Let’s continue with most common patterns below…
Solid
This is a very straightforward pattern to determine in bettas. This simply means that the betta is a single, solid color, throughout it’s fins and body. A deep red is the most common solid color.
Mask
Bettas typically have a different colored head than the rest of their bodies. It is normal for it to be a shade darker and then the body has the brighter pigmentation.
A mask pattern is unique, not because the head is a different from the body, but because it is the same. It’s as if a betta is wearing a mask to blend in with the rest of their body. The fins can be different colors, but everything from the head to the caudal peduncle will have the same color.
Bi-colored
A bi-colored betta implies that the fish has two colors. The body will have one solid color and the fins will have another. Highly contrasting colors are what’s mostly sought after. *The head of the betta can be darker and the fish will still be considered a bi-colored betta.
Cambodian
The Cambodian betta pattern is a slight modification of the bi-colored pattern. The Cambodian pattern always sports a white or off-white to pink body color. This is then contrasted with brightly colored fins, which are usually red.
Butterfly
Butterfly patterns are very similar to bi-colored patterns. The difference is that around half of the fish’s fins are the same color as the body. Almost 50% of the fins will have the same color as the body and the remaining 50% of the fins will have a pale or see through look to them.
Dragon
The dragon pattern displays a betta body that has thick, white, and metallic looking scales. The fins can be any color, however, they are usually red.
Marble
The marble pattern in bettas got its name from the patterns in marble. Marble betta feature random splashes of somewhat line-like coloring all over their body. The patterns are usually brightly colored on a light backdrop on the body.
What is amazing about bettas with this pattern, is that it can change as they age. The splashes of color will change places, or will show in a different form.
Multicolored
A multicolored pattern simply features a betta that has three or more colors