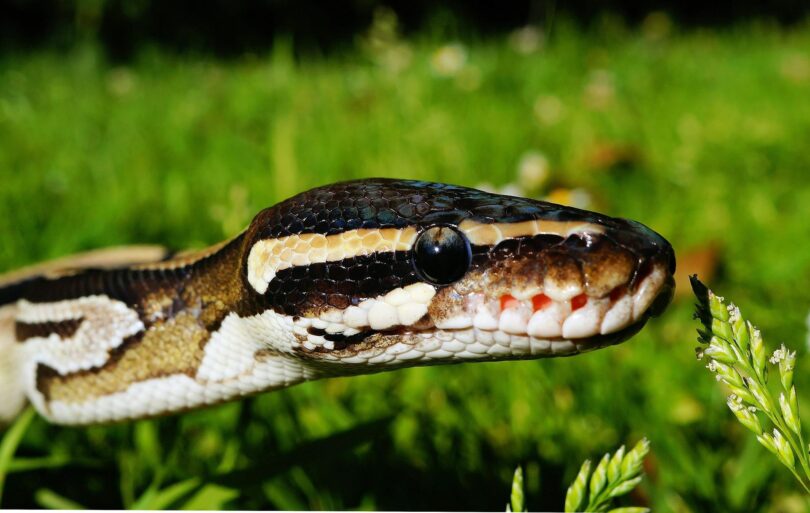 For those who are unfamiliar with snakes, the idea that having a snake as a pet is easy is common. Nothing could be further from the truth. Although snakes don’t need to be walked or taken outside, snake owners are just as busy taking care of their pets as other pet owners, ensuring their snakes have an environment in which to thrive.

As we have mentioned before, the ball python is an extremely docile pet. It is the perfect introduction for an individual or family looking to branch out into the world of reptiles. It can even help teach children about snakes and keep them from developing unfounded fears.
Ball pythons won’t bite (unless severely provoked). They aren’t venomous, and even though they are constrictors, they are much too small to do any damage to humans, not that they would even try. They fit none of the stereotypes attributed to snakes, which make them both great pets and great teaching tools.
Ball pythons are not slimy to the touch, so you should not feel uncomfortable handling them. In fact, a pet ball python should be handled so that it gets used to human touch. It will tolerate this happily, although will get bored of the attention quite quickly. Ball pythons are inquisitive, intelligent creatures, so don’t be surprised if your new pet wants to ditch the cuddling and explore after a while.

Snakes are carnivores. Their general diet consists, in captivity, of mice or rats appropriate to the size of their mouths. A hatchling will start on baby mice about once every five or six days. As it grows, it will move on to adult mice, which it needs to eat about once every seven to ten days.
If the idea of feeding your snake a wriggling mouse makes you nauseous, there’s good news. It’s actually better not to feed your snake live mice. A live mouse could fight back and bite your pet. Even more dangerous is to use wild rodents, because these could be covered in ticks, mites, or other parasites.
The best option is to feed your python frozen mice. Don’t worry about getting the mice. It might sound like a strange product that will be difficult to find, but they are available in most pet shops and online. You can’t feed your python the mice while they are still frozen, though. They should be thawed to room temperature before feeding.
Adult snakes can have a bit more variety in their diet. Day old chicks are a good option, although distinctly not for the squeamish or especially soft of heart. As the snake gets bigger, larger mice and rats can be introduced to its diet. It is also best to take the snake out of its tank for feeding. If you don’t, your pet could ingest something it’s not meant to, which could become impacted inside its digestive tract. This could cause severe distress or even death, so be careful to prevent this from happening.
Just as people might like to take a nap or lounge about after having an especially large meal, your snake needs to rest after eating. Snakes digest their food extremely slowly, so it shouldn’t be handled for at least forty-eight hours post feed, or it is likely to regurgitate the meal.

Rather like young children, ball pythons are really fussy eaters. There are
many reasons why they might refuse to eat. Females might refuse to eat if they are about to begin ovulation. They might also refuse to eat if they are about to shed their skin (more on this in the next section). If they are stressed or are being handled too often or if the conditions of their environment are not right, they may also refuse to eat.
One way to tempt your snake to eat is to “brain” its food. This involves cutting into the skull of the prey to release the scent of the brain, which, to the python, is evidence of a gourmet meal.
If that doesn’t work, it’s okay. It is not the end of the world if your python misses a meal, but you should try to work out why it is not feeding and resolve the matter in time for its next dinner.
Your snake also needs to drink, so make sure you provide it a good-sized bowl of fresh water. It needs to be a solid bowl, or it will tip over when the snake drinks. As we will see next, the water can also be useful for skin shedding, so don’t be surprised to see your pet using it as its own private swimming (coiling might be a better word) pool. Because of this, however, you need to keep an eye on the water. If dirt, feces, or other debris is evident in the water, it needs to be replaced, and the bowl thoroughly cleaned.

Pythons will shed their skin several times a year, with the young doing this more frequently than their older brethren.
There are signs which indicate that your pet is about to do this (the proper name for the process is preecydsis). The first clue is that the snake’s skin color will change. It will become duller than usual. The eyes of your pet will turn a blue-grey colour, and it will become lethargic. This stage is referred to as being “in blue,” and is one of the few times when care needs to be taken in handling the snake.
It is vulnerable at this time, as its vision becomes impaired, so it might become defensive. It is best not to handle the animal as it goes through the shedding process. At this time, most pythons won’t eat, but that is not always the case. It depends on how the snake reacts to preecydis.
Some snakes shed easily and without any help, but most can do with a bit of human assistance. Raising the humidity in your pet’s tank is one of the most useful ways of doing this. Providing your snake with a larger bowl of water will both increase the humidity and allow the snake to soak if it wants to.
Misting the tank also helps to raise humidity.
You can also give your snake a homemade humidity box. This can be something like an ice cream container filled with damp moss. A hole is cut in the top of the box, smaller than the snake, to allow the humidity to escape into the vivarium.

When the preecdysis is complete, the snake enters the ecdysis, or shedding, stage. It will usually start by rubbing its head on a stone, rock, or whatever décor you have inside the tank, to start loosening the skin around its head.
Once its head gets out of the old skin, it will crawl out of the rest of the shedded material, rolling it inside out in the process. A branch or sturdy plant can help it with this. When the snake is completely out of its skin, the old covering should be removed from its habitat.
At that point, it is worth giving your pet the once over, checking particularly that skin over the eye caps and tail has not been retained. Bathing the snake and removing any bits of old skin left will help to avoid infection. This also removes the risk of healthy skin dying under its old coat.

At this point, it is worth pointing out the value of keeping a written and pictorial record of your snake. Diagnosing illnesses can be tricky, since the ball python is a notoriously poor eater, and that is the usual clue to any animal being unwell. A record, in writing and photos, can help to determine changes to behaviour and appearance. In particular, records should be kept of eating habits, shedding habits, and, for females, ovulation trends. It is also worth checking and recording weight and length periodically.

In this post , you have learned about looking after your new pet.
You now know about the ball python’s diet—mice or rats, about once a week—and some reasons why your snake might refuse a meal.
You are informed about skin shedding. You know several ways to help your snake along in the process.
In the next post You will learn about proper housing for your snake