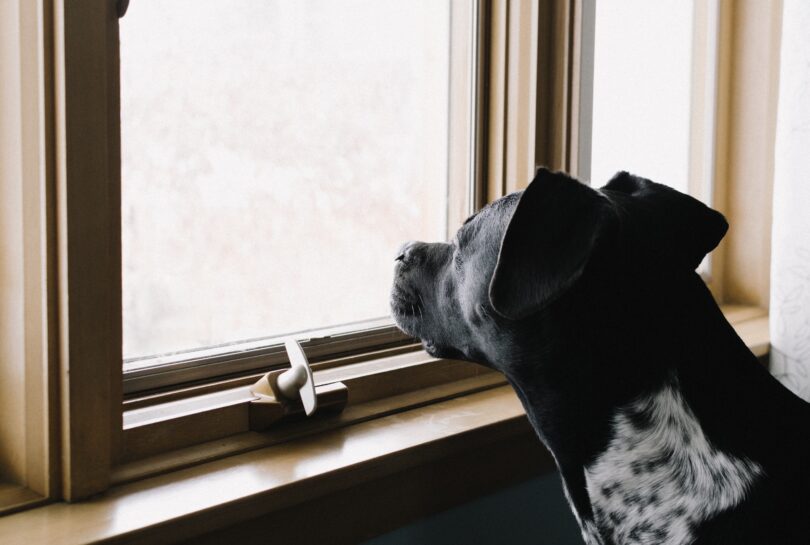 KACY AND HER DOG’S OBSESSION :
Like any other day, Kacy found her dog sitting at the window staring intensely at something outside.
At first, she couldn’t understand what he was doing, but with time she realized that he was looking through the neighbor’s window, the same thing was happening day by day, and despite all her efforts to prevent the dog from doing that, he resisted, even when she offers him a walk, which he loves the most.
Kacy always thought that she is a great pet owner, but she couldn’t understand why her dog wasn’t moving an inch from his regular spot. she always wondered what he was looking for through the neighbor’s window.
His staring seemed to be at something specific since it was way different from his usual staring at traffic or cars passing by, she couldn’t put a finger on what he was looking at,she had no idea if it was a person, an object, or even a squirrel, but as far as she knows there weren’t any squirrels around.

It was a mystery to her, so she decided to stay at home on her day off in order to solve this mystery and get to know what her dog was obsessing over all this time.
On her day off and while watching television, Kacy noticed her dog staring at the neighbor’s window where there was a cat sitting and staring back at the dog, she wondered if her dog indeed was stalking that cat all this entire time, the staring never stopped for two hours, when she looked back at the cat, she was peacefully curled in a ball and sleeping,
Kacy found that weird since her dog isn’t a cat lover.
After days of just observing, Kacy was smiling at the fact that the two animals share such a beautiful bond and staring at each other for hours is their personal way of expressing it.
But then again, Kacy doubted that and was thinking that it was just her imagination messing with her and that couldn’t be true.

It became a ritual for her, waking up every day and finding her dog staring at his little friend, But one day, she walked down the stairs and saw that her dog was lying on the floor, she knew something was wrong because he wasn’t looking at the window like usual, first thing that came to her mind is that he’s sick, because his food bowl was full, he didn’t even touch it.
She couldn’t stand seeing her dog like that, so she took him to the vet, she even explained to the vet what her dog was doing all this time, the vet just laughed about it and only asked about the dog’s diet, activities, and changes in sleep.
Her dog seemed healthy and in good shape, but she couldn’t stop worrying about him, He used to be high-spirited, but now all he does is lying on the floor looking depressed.

Getting back home from the vet, the dog rushed immediately to his spot but didn’t look out the window, Kacy found that strange. She lifted her head to look at the neighbor’s window, but something was blocking the view, they were some plants placed by the neighbor! that’s when she realized why her dog was sad and acting weird, she blamed herself for not seeing it before, so she came up with a plane to help her dog.
She tried everything her dog liked, from playing with him to taking him for as many walks as she could or even buying him new toys, but nothing seemed to be working, he didn’t even respond to her efforts at all.

All she had to do is to reach out for the neighbor and explain the situation for him, but she hasn’t met the owner before, that’s why she was nervous and thought that maybe he’ll consider her a crazy woman, that didn’t stop her, she wrote a note where she mentioned all the things she witnessed over the last weeks, and asked him to remove the barrier so that their pets can see each other again, she taped the paper to the neighbour’s window and wished for the best.

She wasn’t expecting to get a response the very next day, she surely couldn’t believe her eyes, the neighbour removed the plants and was more than happy to step out of the way and let the love be it.

But was this even real? Would the animals get back to their staring contest?
No worry about that, as soon as the plants got removed , the dog’s good spirit had returned as well as the staring shared between him and the cat. The owners were thrilled to witness such a beautiful thing every day.
Which lead us to think that animals are capable of much more than just friendship, in this case, it is LOVE ladies and gentlemen.

That’s the end of our story , but if you’re not convinced , I would kindly ask you to keep reading the following stories

The two animals who shared such a unique bond :
One day at the street, Kodi found a new born kitty , Her name is MYSHKIN , the dog took the little cat under his care from day one, she was fierce and scared of him at first, but at the end she found great comfort under his care and never left him.
Kodi got very sick, he couldn’t protect her like he always did, and abuse was coming their way, such as the constant attacks from the street’s dogs, so it was the little kitty who took the protector role, as she would fight with all her power to save her friend from any harm.
And that bond was never cut till the very end.

RUTH THE CAT AND IDGIE THE DOG:

These two friends were found together after their owner abandoned them , they never left each other’s side, Idgie was forever the cat’s protector, and now they both share a very happy life in their new cosy home.

This story might be the most touching of them all. I’m sure some of you will be touched!
Scout the cat and Charlie the dog, those friends shared a very special bond, they were partners in crime, they did everything together and never been separated until the death did.
When Charlie passed away, nothing seemed interesting to the poor cat anymore, he lost his other half, and could never go back to his old self.
He couldn’t even sleep unless he was curled up next to a computer watching his friend’s old videos.
Even after death , their bond never faded.

MERILL AND TACO: ( The loyal friends)

Two dogs arrived at the shelter after being abandoned by their previous owner, It was obvious to everyone that they share a very strong bond, since they couldn’t bear to be separated from each other without crying.
Merill was very sick , she had a serious infection that needed an instant surgery to fix it. the staff took her to the operating room, meanwhile , the poor Taco couldn’t focus on anything, he was depressed, after the operation , Merill was sent to an isolated room where she could finish her recovery, what the staff didn’t know is that the two dogs couldn’t accept being away from each other , they cried all the time , and that’s when the staff let Taco to join his friend .Taco on the other hand ,he never left Merill’s side during the whole recovery process.

The shelter’s crew couldn’t believe what they’ve witnessed and they were touched by that friendship.
Usually , when people come to the shelter, they aim for one little , healthy dog , they don’t pay attention to the old ones like Taco, but Merill on the other hand received more attention . and here when our story begins.
A man comes to the shelter, to take home his new pet after finishing all the protocol required,He put the collar to his new best friend, aka Merill, but the last one wasn’t happy about leaving Taco behind her, the poor man noticed the sadness in Merill’s eyes but he had no idea about the current situation , he asked the staff about it and they explained everything to him.
He was touched by the story and was more than happy to let go of Merill and adopt another dog because he couldn’t adopt both of them.

The staff changed their strategy , so they listed onto their website that the two dogs should be adopted at once.
A San Jose family read the story and fell in love with the bond shared between the two dogs , so they decided to adopt both of them. The two dogs were excited to be leaving together for a new adventure, but that’s not the end yet .. Taco was an old dog, he had some health problems, but they were minor issues , the family wasn’t fully relieved , so they went to see a vet and do a general check-up , it was all bad news , their little friend had a serious problem in both his heart and lungs .

The vet advised them to take him right away to a specialist who will explain to them the current situation and how the recovery process will be.
His new family was aware that he is an old dog and there is a big chance that he won’t recover , even with the medication , but they did everything to save him. Merill was stick by her friend’s side , and with a miracle Taco’s condition started to improve with time , and now he is healthy , safe and enjoying his life to the max with his little friend and their lovely family .